The global market for ammonium thiosulfate is anticipated to reach US$ 373 million by 2022's end and grow at a CAGR of roughly 7.9 percent from 2022 to 2032, according to Fact.MR, a provider of market research and competitive intelligence. Ammonium thiosulfate demand is rising as a result of increased corn production, which is the main driver of market growth.

Over the past ten years, the ammonium thiosulfate industry has become more consolidated, largely due to the existence of a few key players who control the majority of the market share. Due to the significant demand for fertilisers for corn farming, the U.S. also houses renowned ammonium thiosulfate manufacturers.

For More Insights into the Market, Request a Sample of This Report: https://www.factmr.com/connectus/sample?flag=S&rep_id=2421

Since corn requires sulphur to grow, an increase in corn consumption will directly affect the demand for ammonium thiosulfate (ATS). As a result, it is anticipated that using ATS to produce corn will present an absolute dollar opportunity worth US$ 108 million over the following ten years.

·         Over the forecast period of 2022 to 2032, industrial grade ammonium thiosulfate is expected to offer an absolute dollar opportunity worth US$ 189 million.

·         Ammonium thiosulfate consumption in agriculture is anticipated to rise at a high CAGR of about 8.1 percent depending on end use.

·         By 2032, North America is anticipated to hold a 41 percent market share for ammonium thiosulfate worldwide.

Both nitrogen and sulphur, which are required in varying proportions for crop growth, are present in ammonium thiosulfate, or ATS. The controlled release characteristics of ATS allow it to be distinguished from other fertilisers. For instance, in ATS, the majority of the sulphur is applied to the soil and then made available to plants.

Furthermore, solid ammonium thiosulfate, which is also used as a nitrification inhibitor, is highly soluble. However, over the past five years, the use of ATS as a herbicide carrier has gained popularity. As a result of these properties, ATS consumption in agriculture is expected to increase significantly between 2022 and 2032, with a CAGR of about 8.1 percent.

·         For ATS, TIB Chemicals constructed new storage tanks in October 2020. (ammonium thiosulfate). The building of storage tanks will improve the company's supply chain capabilities because TIB Chemicals has been concentrating on the effective supply and distribution of ATS.

·         Koch Fertilizers announced in May 2021 that 2 million gallons of ATS storage would be built. This action has been taken to satisfy the rising demand for ATS. Koch Fertilizer includes features like internal coating and insulation when building storage capacity. This will guarantee a sufficient supply of ammonium thiosulfate, particularly in the United States where corn production has increased at a record rate. 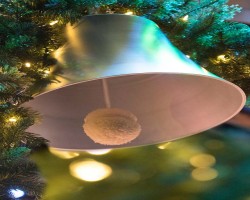 The World Premiere of the Ringing Nativity comes to the Worl...